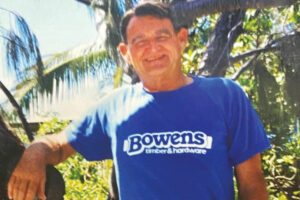 I want to celebrate a significant birthday that will take place on the 25th of August 2021. Terry Mullin will be 100 years old on that day.

If I were to name a mentor who made the most impact on my business life, it would be Terry. His business, Terry Lumber Company, was a significant operation in the Los Angeles area of California, U.S.A. The company was started by his father but progressed under Terry’s leadership to be the major supplier of timber in the construction market in L.A. and its surrounds.

The Beginning of a Friendship

For some reason, he and I ‘hit it off’ despite our 22 year age difference. He also had two sons, Tom and Russell who eventually joined the business – our John was only three at the time and Andy Bowen not born until 1983, but his birth and that of Anna in 1975 and Libby in 1976 were always a celebration well recognized by Terry and Diane. We had little to do with their daughter Reilley but had the pleasure of meeting her in Hawaii where she lived and Terry holidayed.

I think the impact of family life within both families was as important as the business journey Terry and I were both on (with Bowens very much the junior partner there!)

Sadly, both of Terry and Diane’s sons died from cancer – Tom who had been appointed President (MD) of Terry Lumber died in 1999 and Russell, manager of the Terry Lumber yards, died in 2007. Both were excellent lumber men who were well and truly growing their business, as John and Andy Bowen are growing ours.

So, I learnt from Terry through sad times and exhilarating times – the personal tragedies he experienced (including his stepson’s death in the twin towers tragedy of 9-11), brought out the great character and moral strength of the man – his ability to grieve, to accept what is and move on with his life.

Terry loves Australia having spent time as a representative of Pan Am Airways (circa 1950) prior to entering the Lumber business. He was based in Sydney for a few years and then Fiji. He understands and appreciates the sometimes profound differences between the U.S. and Australia. He understands how things ‘work’ in Australia. As a Republican, he is very much a critic of the Obama era – but how he handled President Trump’s four years, I’m just not sure!

Not long after our 1974 meeting in L.A. I started writing to Terry and was amazed at the responses I got and the wise and sound advice I immediately received. I had questions on just where I should be heading with our business, which at the time consisted of our North Melbourne operation, Mount Evelyn (which opened in 1966) and Hastings (1970/71).

While I was keen to pursue the DIY market and move away from Trade (a 50/50 balance was about where I wanted to be), Terry and his company’s success in pursuing the building contractor first and the serious DIY’ers second kept me from straying too far from Bowen & Pomeroy’s traditional trade/wholesale path – one not too dissimilar from the Terry Lumber formula.

Between 1974 and 1994 I opened branches at Bentleigh East, Croydon, South Melbourne, Rowville, Preston, Thomastown, Camberwell, Rosebud, Hallam and Taylors Lakes. Bentleigh and Croydon realistically were the only true DIY attempts that I made. While in many ways I was experimenting I really needed more discipline in my approach to the future of Bowens.

One of the turning points came after Terry challenged my suggestion that Bowens should seriously consider starting up a ‘warehouse’ style centre on three hectares of land I had accumulated on the corner of Stud and Kelletts Roads. Terry sent me a note that went as follows:

“Jack, you have seen the success of Home Depot and Lowe’s in our country but I want to tell you that most, if not all of the smaller independent family businesses who have gone down that path, who have turned their back on what was their traditional trade business, are going or gone broke!”

The first true warehouse style building materials store had been opened in Hobart Tasmania by a family sawmilling company, Kemp & Denning. It worked for them, why not for Bowens? Word was out though that Westfarmers/Bunnings had a format very similar to Home Depot – and when it was announced that the first of these stores was to be built in Melbourne in 1994 that was enough for me!

Terry and Terry Lumber were good enough to employ my brother David in 1976 and 18 years later my son John spent four months working at a number of Terry operations including Tarzana Lumber, their main and largest yard. Terry also provided me with his company’s KPI’s, and any and all information that I requested. He introduced me to the Lineyard Group which consists of a number of the leading independent lumber companies in the U.S.A. and Canada – John and Andy Bowen continue to attend the annual meetings of this group.

Terry, I thank you for contributing so much to the success of Bowens today – the way we operate and the culture we promote emulate what you created so many years ago. Thank you for your and Sharon’s hospitality and friendship in recent years, together with you, Diane, Tom and Russell’s in the very early days.

Seeing the Wood for the TreesComposureHow can we help?ReliabilityCharacter Sets the Tone for a Healthy Workplace